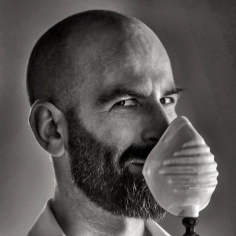 August brought samples which turned out to be mostly a string of duds, and I was losing heart and readjusting my expectations downwards, both ultimately bad ideas. Then came a parcel from perfumer Antonio Gardoni, and my spirits lifted even while unpacking, because the wrapping paper smelled great, I assume from having absorbed ambient smells in his workshop. I had occasion to review Gardoni’s spectacular Maai two years ago, when I was doing a column for Style Arabia*. I met Gardoni at Esxence in Milan, and he struck me as an erudite, humorous intellectual (he quoted, tongue-in-cheek, several lesser-known Platonist philosophers in a little speech at the IOA award). Maai was a deliberately retro thing, a sort of L.A. Confidential of fragrance, meticulously true to the feel and texture of a big chypre from 70 years ago.

It was not clear to me whether Gardoni, a practising architect, would have the time, opportunity and creative wellspring to continue with other fragrances. I need not have worried. The samples he sent me include his second fragrance for his own firm, Bogue, called O/E, and two compositions he did for others: Gardelia for Bologna’s Profumeria Sacro Cuore and Aeon 001 for the eponymous Zurich firm. The first thing I noticed about the fragrances when you spray them on strips is that the room air smells sensational. Walk out and back in after a few minutes, and you can’t help smiling. The second, via a coincidence of timing, is that these perfumes play well with food smells, which I take as a sure sign of long-term conviviality. The third is that I actually  felt like spraying them on skin to get the full effect, whereas I am usually reluctant to simultaneously turn up the volume and hurry to the drydown.

They are very different from each other, and go way beyond Maai in intent. O/E is a woody citrus of the highest order, Aeon 001 is the best vetiver in a long time, and Gardelia a classic woody floral in the manner of Dior’s long lost Diorama. What is striking about them is their weight, richness and balance: these are confident, classical perfumes that avoid one-liner topnotes and focus on what used to be main event in perfumery, the heart and drydown. They feel mostly natural and utterly comfortable without being in any way soggy. This suggests to me that Gardoni is judiciously using aromachemicals to reinforce the rich texture. I very much hope Gardoni thrives and his perfumes remain on the market for decades, for hearts will be broken if these are ever discontinued. In the meantime, stock up on more evidence of Italy’s revival of great perfumery.

* Style Arabia will soon become Vogue Arabia, and Vogue does not do negative reviews. So no more columns. It was a lot of fun while it lasted.